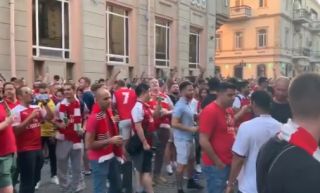 Arsenal star Henrikh Mkhitaryan will not be involved in tonight’s Europa League final against Chelsea, and Gooners are sending their support by chanting his name in the streets of Baku.

Political conflict means Mkhitaryan felt the need to stay away from this match in a development that looks a real embarrassment for Uefa and the decision-makers when it comes to selecting venues for major finals.

“Here’s to you Mkhitaryan, Arsenal loves you more than you will know”

Arsenal fans have been filmed in the video above chanting a Mkhitaryan-themed take on Simon and Garfunkel’s ‘Mrs Robinson’.

And the Armenian playmaker has tweeted a response to show his appreciation for the support as he sadly misses the chance to play a part in this big game.