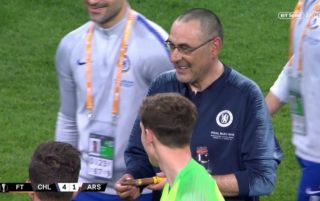 Chelsea manager Maurizio Sarri decided to pull out a cigar on the pitch tonight, as the Italian celebrated his side’s Europa League final win over Arsenal.

The Blues beat Unai Emery’s side 4-1 thanks to goals from Pedro, Olivier Giroud and Eden Hazard (x2), as the west London club ended their season in style.

Sarri pulling out a cigar on the pitch is highlight of the season? #EuropaLeague #UELfinal pic.twitter.com/5DKrN77q4R

Following the match, all of Chelsea’s players and staff took to the pitch to celebrate, including Sarri, who whipped out a cigar to celebrate his side’s win.

Given his love for tobacco, it’s nor surprising to see Sarri do this, although we’d thought he’d at least wait a bit before pulling a cigar out!