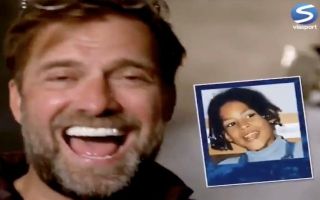 Liverpool boss Jurgen Klopp was in a jovial mood when asked to look at old pictures of his players ahead of a showpiece event on Saturday.

The Reds will face off against Tottenham in an all-English Champions League final this weekend, looking to add a sixth European crown to their impressive collection.

Klopp is chasing down the first trophy of his Anfield reign, after three heartbreaking final defeats in his first four years at the helm.

The German boss doesn’t appear to be feeling any pressure heading into the crunch fixture though – if his hilarious comments on his Liverpool squad’s youth photos are anything to go by.

In a pre-final interview, Klopp can be seen poking fun at Trent Alexander-Arnold, Xherdan Shaqiri, Virgil van Dijk, Daniel Sturridge and James Milner, after guessing their identities from old pictures.

He labels Alexander-Arnold as the ‘Grandfather of the cheekiest corner in world football’ in reference to his assist against Barcelona in the semi-finals of this year’s Champions League, before going on to claim James Milner could play golf at a professional level, in an entertaining sit-down with Viasport.

‘Grandfather of the cheekiest corner in world football’

‘I know people think I don’t play him enough’

Klopp on Shaqiri: “I know people don’t think I play him often enough, he thinks probably the same.” ?