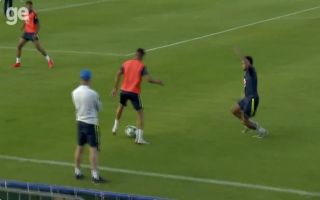 Paris Saint Germain winger Neymar did not respond well to being beaten by a superb piece of skill by Weverton while on international duty with Brazil.

The Selecao squad have gathered to prepare for this year’s Copa America, which kicks off in mid-June and there have already been some surprise decisions ahead of the tournament.

The likes of Tottenham’s Lucas Moura and Liverpool’s Fabinho missed out on a place in Tite’s final 23, while Neymar was stripped of the captaincy, with Dani Alves inheriting the armband from his former Barcelona teammate.

That bold decision has already been proven correct, given Neymar’s shameful reaction to being nutmegged by Cruzeiro ace Weverton in a training session this week.

The 19-year-old wonderkid is not officially part of Brazil’s Copa America squad, but he has been training with the national team to gain some valuable experience.

Neymar can be seen hauling Weverton to the ground petulantly before jogging off as if nothing had happened, in a short clip which you can watch below, via Twitter.

??Brazil called up 19-year old Weverton to the national squad and the kid nutmegged Neymar in training and look at Neymar’s reaction. Just imagine if it happened the other way round, this is ridiculous. pic.twitter.com/cmfJE3njwT

Isn’t Neymar an amazing Role model? See his reaction when he was nutmegged by the new kid Weverton. pic.twitter.com/TSTN8jQpGh

Private: World Cup 2018 winner odds: Who is the favourite to win the competition as England prepare to name final squad?