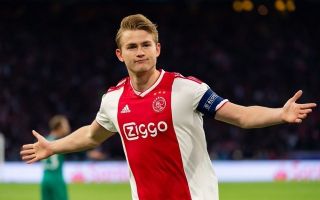 Matthijs de Ligt’s transfer from Ajax to Manchester United could be a done deal, according to Mundo Deportivo and Marca journalist Diego Martinez.

The reporter has tweeted the news just now, stating that an announcement will most likely be held up until after upcoming international games to generate hype over the deal.

MORE: Manchester United try their luck with enquiry for transfer of £80m-rated star during talks over other players

De Ligt to #MUFC is a done deal pending medicals. Total agreement with Ajax, the player and Raiola. I don’t expect any news till after the International games.

In the next week or so you will see conflicting articles. This is to build hype around the deal which #MUFC want.

Martinez has previously accurately tweeted about Alexis Sanchez joining Man Utd over a week before it was announced, so this could be exciting news for Red Devils supporters.

De Ligt is one of the most exciting talents in world football right now after a terrific season for Ajax, whom he captained to the Eredivisie title and a surprise run to the Champions League semi-finals.

The 19-year-old looks to have a great career ahead of him and would be absolutely ideal for United right now given their problems in defence.

ESPN previously also linked De Ligt with MUFC, but suggested the Premier League giants expected Barcelona to win the race for his signature.

However, there has also been talk that Barcelona were increasingly moving away from trying to sign the Netherlands international and looking at alternatives, as per RAC1, as translated in the tweet below from Utd Report.

Barcelona are looking at alternatives for Matthijs de Ligt. Mino Raiola's demands and #mufc and Bayern's higher offers are putting doubts on a move to Barcelona #mulive [rac1]

United fans will now be hoping this can be made official as soon as possible, but at the moment it’s looking pretty promising for them in pursuit of what could be one of the signings of the summer.

Further updates have since come in on De Ligt, with the Telegraph suggesting the deal could also be on, though a final decision will be taken in the next few days.

Similarly to the claim from Martinez above, the piece states United may have been briefing that they were pessimistic over a deal despite still pursuing it.

The Telegraph claim that a move to Old Trafford is seen in Holland as the better option for De Ligt, as he would become a key part of the defence and have the team built around him to an extent, whereas immediate first-team football on a regular basis at the Nou Camp looks less of a guarantee.