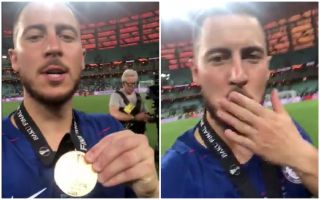 Eden Hazard posted a special message to Chelsea fans after their Europa League win on Wednesday night, and it sparked an emotional response.

The Belgian international scored twice as Chelsea secured a 4-1 win over Arsenal in Baku, ending the season with a trophy coupled with their top four finish in the Premier League.

Hazard ended the campaign with 21 goals and 17 assists in 52 appearances, but speculation is now rife over his future at Stamford Bridge as The Sun note he’s closing in on a move to Real Madrid.

Chelsea’s talisman hinted that he would be bidding farewell this summer in his post-match interview with BT Sport, and as seen in the video below, he took a moment out of the celebrations to address the Chelsea fans and looked emotional himself as he did so.

Time will tell if an exit materialises as there has been nothing official yet, but based on the rumours and Hazard’s comments, it would suggest that he’s ultimately just waiting for the two clubs to agree on a deal which will see him leave west London after seven trophy-laden years with the club.

For now though, they will enjoy their success this week, and coupled with Chelsea’s transfer ban this summer, the Blues will surely be concerned if they lose their leading figure as they won’t be in a position to replace him immediately.

‘Hi Chelsea fans, this is for you. Fans in the stadium, fans in London, fans everywhere. I love you.’ ? @HazardEden10 #UELfinal pic.twitter.com/9yVa0YFv40