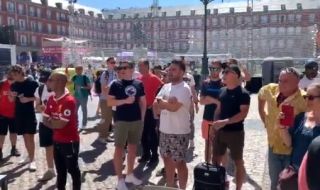 Liverpool fans are already generating plenty of noise and atmosphere in Madrid despite the Champions League final still being over 48 hours away.

Watch below as these Reds fans sing their iconic ‘Allez allez allez’ chant in the streets of the Spanish capital, which will be hosting this season’s Champions League final between LFC and Tottenham.

The scenes in Madrid more than 48 hours before kick-off ?#LFC pic.twitter.com/ZECJt5GW8X

It promises to be a fine match between the two Premier League giants, and Liverpool’s famous travelling support could prove key to spurring Jurgen Klopp and his players on.

If this clip is anything to go by, it’s going to be absolute mayhem by the time of the big game.