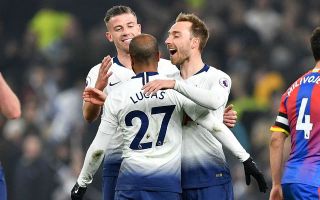 Tottenham star Lucas Moura has revealed he held talks over a loan transfer to Manchester United before eventually winding up at Spurs instead.

According to the Brazilian winger in an interview with the Guardian, he was not keen on leaving Paris Saint-Germain on a loan deal only, as he did not want to return to the Ligue 1 club.

“There was a conversation with United but it was for a loan and I didn’t want a loan,” he said.

“I thought that if I left PSG, I didn’t want to go back. When I came to Tottenham, and I saw the training ground and met the coach, I said that I wanted to come here.”

Moura had a difficult time on the fringes on the first-team for much of his career at the Parc des Princes, but he’s been a fine signing for Tottenham.

To be honest, his signing has been worth it for his stunning hat-trick away to Ajax in the Champions League semi-final second leg alone as he played the starring role in the club’s thrilling comeback in Amsterdam.

Moura has proven himself capable of being more than just a squad player at a club like PSG, and Man Utd fans might well be thinking their club made a mistake not trying to sign him on a permanent deal when they had the chance.

The 26-year-old could well have been an upgrade on flops like Alexis Sanchez, Anthony Martial and Jesse Lingard in this Red Devils squad.

Still, Moura now has the chance to be a Spurs legend as he will hope to fire for the club again in this weekend’s Champions League final against Liverpool.