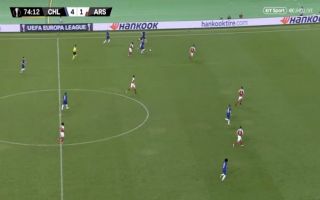 Chelsea embraced ‘Sarriball’ to full effect against Arsenal in the Europa League final as they secured a comfortable 4-1 victory.

Olivier Giroud opened the scoring early in the second half before Pedro added a second soon after and Eden Hazard converted a penalty to make it 3-0 just after the hour mark.

Alex Iwobi pulled one back for the Gunners but Hazard had the final say, scoring his second after a swift attack to ensure the Blues went home with European silverware.

Chelsea also demonstrated ‘Sarriball’ perfectly towards the end of the match, putting together a slick 17-pass move from one end of the pitch to the other, which nearly resulted in Hazard completing his hat-trick.

Maurizio Sarri’s preferred style of play centres around quick passing interchanges and movement, which his side now seems to have mastered right at the end of his first year in charge.