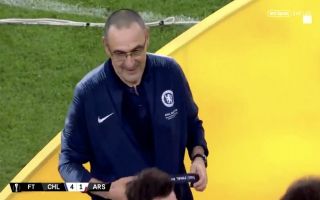 Chelsea boss Maurizio Sarri marvelled at his Europa League winners medal after his side beat Arsenal 4-1 in Baku on Wednesday.

The Blues overpowered the Gunners with a superb second-half display to lift the continental trophy, with an Eden Hazard brace, an Olivier Giroud header and a strike from Pedro sealing a comprehensive win.

Alex Iwobi grabbed Arsenal’s only goal on the night but they ultimately missed out on qualification for the Champions League as a result of the defeat, while Chelsea revelled in yet another major title triumph.

The Europa League is the first trophy Sarri has ever won in his career as a manager and he was understandably emotional after the game.

The Italian boss was seen taking a moment to admire his winner’s medal before joining in with the celebrations, which showed just how much the victory meant to him.

2018-: Chelsea, winning his FIRST EVER trophy as a manager.

Almost draws you to tears when you see him look at his medal pic.twitter.com/qrDOzwA0Go