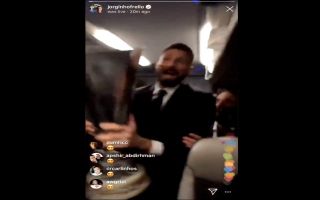 The Frenchman opened the scoring 49 minutes into the match with a brilliant diving header and then chose not to celebrate in front of Gunners supporters, having previously played for the club between 2012 and 2018.

Pedro then added a second for Chelsea before Eden Hazard fired home from the penalty spot and the Belgian grabbed a second shortly after Alex Iwobi had pulled one back for Arsenal, in a frenetic second half of action.

Maurizio Sarri’s side ultimately lifted the trophy and despite his humble celebration after scoring, Giroud took to mocking his former club on the Chelsea coach as the team left the Olympic Stadium.

The veteran striker, 32, was recorded by Jorginho for Instagram Live and can be seen lifting the Europa League trophy while shouting: “Thank you Arsenal!”