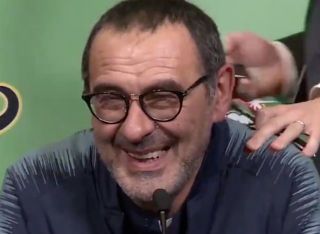 Reports in Italy have suggested that a meeting between Chelsea officials and Maurizio Sarri’s agent has led to an agreement to let him leave Stamford Bridge.

The Italian tactician arrived in west London last summer from Napoli, and delivered what was arguably a successful season in the circumstances.

Not only did Chelsea finish third in the Premier League table behind runaway title rivals Man City and Liverpool, but they reached the League Cup final and ended the campaign with silverware after winning the Europa League in midweek.

In turn, despite facing a significant amount of scrutiny and criticism along the way as he tried to implement his preferred style of play at Stamford Bridge, Sarri can arguably be pleased with the job that he has done at the club.

However, as noted by Corriere dello Sport, it has been claimed that following a meeting between his agent, Fali Ramadani, and Chelsea officials, they have agreed to let him leave this summer, which in turn could push him closer to taking the Juventus job.

That will of course be vacant this summer as Massimiliano Allegri has already confirmed that he will step down, as per The Guardian, and while it will undoubtedly be a very unpopular decision among Napoli fans to see Sarri join the Turin giants, that appears to be the direction in which he’s going.

Sarri spent three years in charge of the Partenopei, locked in a heated battle with Juve as they tried to end their domestic dominance.

As a Naples native too, he will be fully aware of the rivalry that exists between the two clubs, but it appears as though he may well be on course to cross that divide as he eyes a future away from Chelsea this summer.