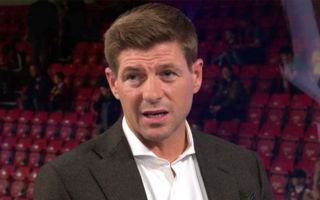 Steven Gerrard has backed Jordan Henderson to have a big impact for Liverpool when they face Tottenham in the Champions League final.

The Merseyside giants face Spurs in Madrid on Saturday night hoping to claim their sixth European trophy, but Jurgen Klopp will have big decisions to make with his starting line-up.

Naby Keita hasn’t been included in the squad due to injury, but there is still a decision in midfield between the likes of Henderson, Fabinho and Georginio Winaljdum.

Naturally, no Liverpool player will want to miss out on a starting berth for such a big occasion, but Gerrard believes that Henderson has to start in the Spanish capital as he has the capability to have a huge influence on the encounter.

“I’ve always been a fan of Jordan Henderson, I believe he’s a selfless player, I think he does a lot of work for the team that goes unnoticed,” he is quoted as saying by the Metro. “I know what he’s like on and off the pitch. He puts himself behind everyone else; he’s just that type of person.

“I think he’s more than capable of winning any football match that he’s playing in and I think of late, certainly since he’s been playing a further forward role, he’s taken more responsibility and has been one of Liverpool’s most consistent players.

“I’ve watched him and spoke to him and said ‘Jordan, you need to maybe try to do things yourself rather than doing the easy thing.’ Because he’s very capable of playing the final pass or the excellent delivery in and he’s capable of scoring from the edge of the box and running into the box to set a goal up.

“Jordan will do all the dirty running and do all the covering and all the organising. I think he’s matured a lot and he’s taken more on, on the pitch.”

Time will tell if Klopp agrees with him and looks to Henderson from the start, but with Wijnaldum proving to be so crucial in the comeback against Barcelona and with Fabinho impressing in his first year in England, coupled with the likes of James Milner to consider, the German tactician has plenty of options.