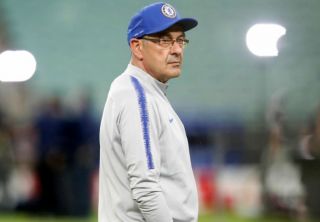 Chelsea boss Maurizio Sarri has reportedly reached an agreement with Juventus to replace Massimiliano Allegri as their coach for next season.

The Italian tactician led the Blues to the Europa League trophy in midweek, which followed a top-four finish in the Premier League and a run to the League Cup final.

In turn, despite facing significant scrutiny and criticism along the way, the former Napoli boss has arguably done a great job at Chelsea and should be commended for reaching their objectives in his first season managing in England.

However, according to Goal.com, his stint at Stamford Bridge isn’t expected to last a second season, as it’s claimed that he has reached a deal with Juventus to become Allegri’s successor, with talk of a €7m-a-year contract being on the table.

It’s noted in that report that a meeting was held between Sarri’s agent and Chelsea officials on Friday which led to an agreement to allow him to move on, and so it would appear as though he is edging ever closer to a return to Italy.

Time will tell if it becomes official though as it’s merely speculation at this point, but should a move to the Turin giants materialise, it certainly won’t go down well with the Napoli faithful given their rivalry with the reigning Serie A champions.

In turn, Sarri will perhaps have to be wary of the impact such a decision will have with the Napoli fans, and given he’s a Naples native himself, it might still be a determining factor.

Nevertheless, based on the report above, it would seem as though his time at Chelsea is coming to an end, and that is surely a questionable decision in itself to allow him to leave given the results that he has delivered.

It promises to be a difficult summer for Chelsea, as aside from their transfer ban from FIFA, the Express note that Eden Hazard is still being heavily linked with an exit and so it could yet get worse for the Blues.