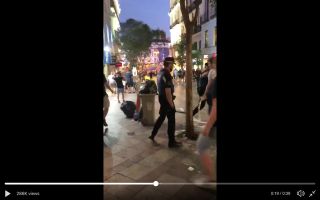 There were some disturbing scenes in Madrid last night, it’s understood that 50 Tottenham fans were assaulted by Spanish police ahead of the Champions League final.

Footage from Madrid shows Spanish police entering a city-centre bar and removing Tottenham fans from the area, one part of the video also shows a police officer using his baton to strike a fan on the leg, striking a fan on the leg with his baton.

Telegraph correspondent Tom Morgan spoke to fans who were involved in the incident:

Brilliant atmos on a sweltering night in Madrid, but tense scenes between police and fans at Cafe and Tapas, just off the Puerta del Sol. Officers with batons swept in to confront and clear out Tottenham supporters, who accused officers of heavy-handed tactics….

“We were having a laugh and having a joke – it was all Tottenham and just fun,” said one supporter. “Then suddenly two of them (police) come at us and suddenly it was bang, bang, they all came steaming in. Smashing tables with their batons. They are bang out of order.”

“I had an eight year old boy on my shoulders,” said another Spurs fan, 27. “It was his first away day and we were all having a nice time.”

The restaurant says police were responding to complaints that the Spurs supporters had been acting aggressively and shouting abuse at Liverpool fans. He added, however, that officers acted “too heavily”

Here’s a video clip of the aftermath of the incident:

Police in Madrid have just come into a bar and just battered about 50 Spurs fans for no reason. Many injured. Only caught the aftermath on camera. Fucking disgusting and unacceptable. @THSTOfficial @FSF_FairCop @SpursOfficial pic.twitter.com/o0gouDPbis

One fan took to Twitter to voice his concern over the Spanish police’s handling of the situation:

Fuck the Spanish police. Restaurant full of Spurs, riot police come flying in & start hitting us & tables, we were causing no trouble at all. @spain @madrid #UCL #ChampionsLeague sacks of shit.

The same user also squashed rumours that police were called as a result of supporters refusing to leave, the fan revealed that nothing was being thrown around in the bar in question:

I was in the bar, there was no prior warning about leaving & no one was throwing anything around, literally just singing.

We hope that no one was seriously injured in the incident, both Liverpool and Spurs fans have made the journey to support their teams and they deserve the right to enjoy tonight’s spectacle without fearing for their safety.