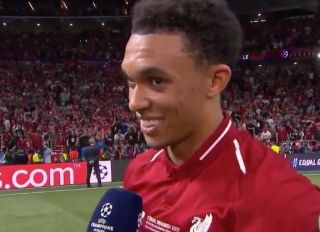 Liverpool secured a 2-0 win over Tottenham in the Champions League final on Saturday night, and it would have been that little bit more special for Trent Alexander-Arnold.

The 20-year-old is a Liverpool native, and he would undoubtedly have been dreaming about moments like this weekend.

From the lows of losing in the final last year and agonisingly missing out on the Premier League title this season, the Merseyside giants ended the campaign in style with a sixth European Cup after winning in Madrid.

Goals from Mohamed Salah and Divock Origi secured the victory, and as seen in the video below, Alexander-Arnold wasn’t too bothered about the manner in which they won, as the most important thing was to secure that win.

Further, the Liverpool fans below loved what he had to say shortly after, conceding that he’s “just a normal lad from Liverpool whose dream has come true”.

In turn, it will be a night that he never forgets, and from a Liverpool perspective, it could now give them the hunger and desire to continue to win trophies and make the most of the talented group of players that they’ve assembled at Anfield.

While it wasn’t a memorable final by any means, Spurs will be left bitterly disappointed to fall just short, while Liverpool will see it as a just reward after being so impressive all season long.

"I sacrificed a lot for this! I am so happy!"

"I'm just a normal lad from Liverpool who's dream has come true!"

Thank you lad.
For making ours come true also. ??