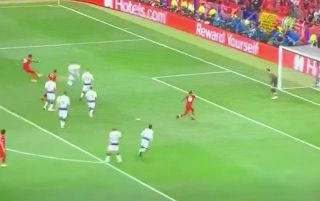 Liverpool substitute Divock Origi bagged a second for the Reds as they doubled their lead against Tottenham in the Champions League final.

Mohamed Salah had given the Merseyside giants an early lead in Madrid, in what turned out to be a scrappy encounter lacking real quality from either side.

It won’t matter to Liverpool too much though as they bagged a second late on, with Origi coming off the bench to score a crucial killer goal, as seen in the video below.

In turn, that edges the Reds ever closer to a sixth European Cup glory, and Jurgen Klopp’s first major trophy since taking charge at Anfield.

While it won’t be the most memorable of finals, Origi has certainly written his name into Liverpool folklore, bagging two goals in the quarter-finals and semi-finals apiece, while also finding the back of the net in the showpiece event too to prove that he can step up when it matters.