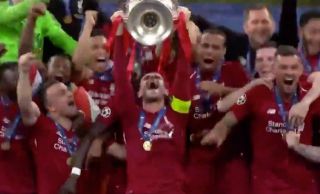 Liverpool secured a sixth European Cup after defeating Tottenham in the Champions League final in Madrid on Saturday night.

Goals from Mohamed Salah and Divock Origi ensured that the Merseyside giants rule Europe once again, with Spurs left heartbroken after suffering defeat in the Spanish capital.

As seen in the video below, emotions took over as captain Jordan Henderson lifted the trophy, with the entire squad on the podium to enjoy the moment.

Having written their names into Liverpool folklore, it will be a memorable night for all concerned, while the fans in attendance produced a magical rendition of ‘You’ll Never Walk Alone’ shortly after.

After suffering such huge disappointment in the Premier League title race, Liverpool ensured that they ended the season in style and they will certainly hope that this is the first of many trophies under Jurgen Klopp in the coming years.

A special night in Madrid ? pic.twitter.com/gDCkKBeZ9V