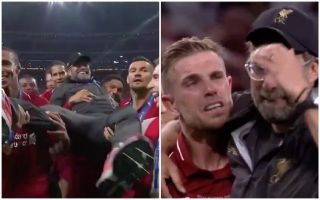 Liverpool boss Jurgen Klopp was soaking it all in as he saw his side secure Champions League glory with a win over Tottenham on Saturday night.

Goals from Mohamed Salah and Divock Origi sealed a 2-0 victory for the Reds in Madrid, landing their sixth European Cup.

As seen in the videos below, Klopp was savouring every minute of it and it was clear to see how close the German tactician is to his players as they ensured that he was in the thick of the celebrations.

It was an emotional time for many of them too as captain Jordan Henderson could be seen in tears while the Liverpool players celebrated in front of the travelling fans, with no sign that things were going to slow down any time soon.

After suffering heartbreak in the Champions League final last season as well as the disappointment of falling short in the Premier League title race this season, it will arguably be a huge relief for all connected to Liverpool to finally see Klopp lift his first trophy as boss.

They’ll now hope that this opens the floodgates in that sense, as having built such a strong squad, there is no reason why Liverpool can’t build on this and win many more trophies in the coming years.

The Liverpool players put Jurgen Klopp on their shoulders and dragged him over to celebrate in front of the fans ?

This is what it means ?

Victorious captain and manager in tears. A night they will never, ever forget. pic.twitter.com/2bTIfemB6j