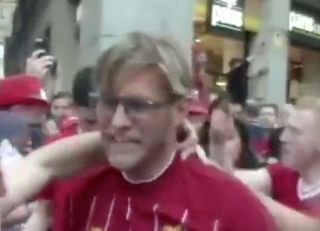 As expected, Liverpool fans have turned out in their numbers and made the trip to Madrid for the Champions League final against Tottenham this weekend.

Countless videos have surfaced on social media of the supporters taking over the Spanish capital, as they prepare for the crunch showdown on Saturday night.

However, there was a more jovial one that went viral, as seen in the tweet below, with a Jurgen Klopp lookalike walking through the crowds and getting mobbed by Liverpool fans along the way.

After stopping for photos and enjoying some banter with the fans in question, it seems as though the lookalike may well need a sit down. Nevertheless, there is an uncanny resemble with the German tactician, and it would have been so easy for some to mistake him for the real deal.

As per the video below, it looks as though spirits are high and the travelling Liverpool supporters are enjoying themselves in Madrid, and they’ll certainly hope that there will be celebrations late into the night as they aim for a sixth European Cup success.

However, Tottenham will be out to spoil their party, as Mauricio Pochettino looks to lead them to a major trophy after their sensational comeback against Ajax in the semi-finals.

This Jürgen Klopp lookalike is VERY popular in Madrid! pic.twitter.com/0L7W9HjP0u