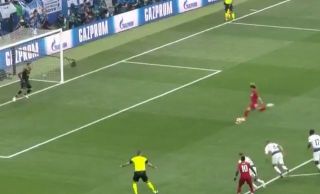 Liverpool took an immediate lead against Tottenham in the Champions League final, with Mohamed Salah scoring a penalty in the opening minutes of the game.

Just a minute into the showdown, Moussa Sissoko was penalised for a handball in the box as Salah stepped up with the chance to give Jurgen Klopp’s side an early lead.

As seen in the video below, the Liverpool talisman made no mistake as he kept his cool and smashed his spot-kick into the back of the net to give the Merseyside giants the lead.

Spurs will now have to re-group and settle after such an early setback, although from a positive perspective, they have ample time to find a way back into the game.

Nevertheless, it’s a huge boost for Liverpool to draw first blood as they look to bounce back from their defeat at this stage of the Champions League last season.

Mohamed Salah from the spot in Madrid! ?

A HUGE decision just 22 seconds into the #UCLfinal ?

This was the penalty awarded to Liverpool after Moussa Sissoko's handball… pic.twitter.com/FypjV9GMNA