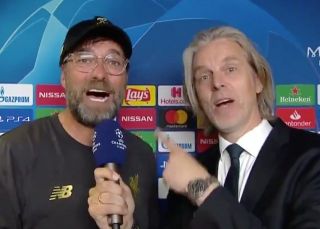 Liverpool boss Jurgen Klopp is undoubtedly one of the most likeable characters in the game, and he proved exactly why with this post-match interview.

After watching his side secure a 2-0 win over Tottenham in the Champions League final in Madrid on Saturday, the German tactician was unsurprisingly in a great mood.

So much so, that he even had time to break into a song as he celebrated Liverpool’s sixth European Cup triumph, as seen in the video below.

We’ve got to hand it to the Reds boss as his personality is simply brilliant and thoroughly entertaining, and it’s moments like these that will be remembered for some time by Liverpool fans too as they have grown extremely close to their current manager.

The same could be said about Klopp’s relationship with his players too, as evidenced in their celebrations on the pitch after the full-time whistle, as he not only lifted the Champions League trophy but was also hoisted onto the shoulders of his players.

It was an incredible night for Liverpool and all those connected with the club, and it would come as no surprise if Klopp has plenty more priceless moments to come in the coming hours and days as the celebrations continue.