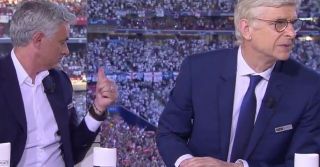 Jose Mourinho and Arsene Wenger were in the beIN Sports studio for the Champions League final on Saturday night, and the Liverpool fans certainly made an impression on them.

In the build-up to the showdown with Tottenham at the Wanda Metropolitano, the travelling Liverpool fans produced a brilliant rendition of ‘You’ll Never Walk Alone’ prior to kick-off.

As seen in the video below, both Mourinho and Wenger were left to marvel over the atmosphere that they generated, and were almost left speechless at one stage before offering praise.

Unfortunately for the Spurs fans, they were left stunned into silence after Mohamed Salah scored a penalty after just two minutes to break the deadlock, leaving Mauricio Pochettino’s side with it all to do to turn things around.

Full credit to the Liverpool fans though, they have certainly travelled in their numbers and have added that extra something to the spectacle as the players disappointed on the pitch in a rather underwhelming Final.

"This is more beautiful than what we can say!" ?

Mourinho and Wenger applaud the Liverpool crowd as 'You'll Never Walk Alone' booms around the stadium!