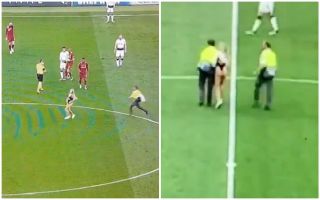 Liverpool’s clash with Tottenham in the Champions League final was stopped as a streaker made their way onto the pitch in Madrid.

Mohamed Salah had given the Reds an ideal start to the encounter as he converted from the spot after just two minutes to break the deadlock.

Spurs were battling their way back into the clash, but things were halted in the 17th minute as a streaker managed to get onto the pitch at the Wanda Metropolitano, as seen in the video below.

Question marks will undoubtedly be raised over the stewarding and the security at the match, as it could have been a more serious scenario as we’ve seen already this campaign involving the likes of Jack Grealish after the Aston Villa star was attacked by a Birmingham City fan.

In turn, while there is a more serious side to the matter, this streaker was successful in getting their minute of fame before being ushered off the pitch by the stewards who eventually caught up.

Streaker on the pitch at the Champions League Final. I think that’s the only time someone hot streaked ? pic.twitter.com/C6yc1234pK

Excellent pace from the lead steward.

#Streaker Runs on pitch live during #LiverpoolFC game with #TottenhamHotspur #ChampionsLeague2019 So funny #UCLfinal She gets a thumbs up from me.? pic.twitter.com/wwja9MDv91