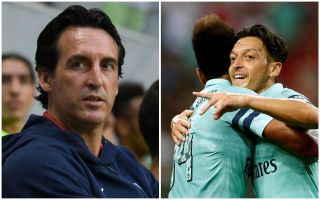 Arsenal manager Unai Emery is reportedly set to meet with club chiefs for key talks in the coming week.

And according to the Daily Star, the Spanish tactician is set to demand that big-name playmaker Mesut Ozil is sold this summer as he wants rid of the German’s ‘toxic’ presence.

Ozil has not had the best time at the Emirates Stadium since Emery replaced Arsene Wenger, having become less of a regular starter in 2018/19.

In fairness, while Ozil is a big name, this looks a justified decision by the Gunners boss as the former Real Madrid man just has not performed as required in the big moments.

The 30-year-old notably went missing for AFC in their humiliating Europa League final defeat to Chelsea in midweek, before Emery dragged him off.

According to the Daily Star, this could well mean it’s the end of Ozil’s career in north London, though the report also suggests the club will likely struggle to find a buyer for him for any decent price after his dip in form.