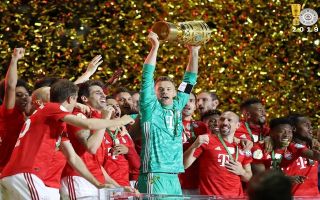 Bayern Munich are open to selling one of their highest-profile players this summer, the ace definitely still has what it takes to be a solid player for some of Europe’s top clubs.

According to German newspaper Bild, German champions Bayern Munich have set a price-tag of €20m for World Cup winner Jerome Boateng, the defender was denied a move to French giants Paris Saint-Germain last summer, on the promise that he’d be Bayern’s main man in defence – this season hasn’t played out the way Boateng would’ve hoped.

According to the Metro, both Arsenal and Manchester United are interested in signing the centre-back, however, The Sun have reported that the Germany international is set to snub a return to the Premier League in favour of a move to PSG or Juventus.

Considering how close he was to joining last summer, you’d think Boateng’s preferred destination would be Paris.

Boateng made 28 appearances across all competitions for the Bavarians last summer, the former Manchester City star has lost his starting berth to youngster Niklas Sule.

With Atletico Madrid’s Lucas Hernandez and World Cup winner Benjamin Pavard joining Bayern this summer, Boateng’s position in the pecking order could be about to drop even further.

Boateng’s time seems to be up with the Bavarians, even the club’s president suggested that the ace should find a new club this summer:

Uli Hoeness has some clear words for Jerome Boateng.#FCBayern pic.twitter.com/6puhczTKZi

Boateng still has a lot to offer to a top club, the commanding ace has played at the highest level for years and his wealth of experience would be a solid addition to the likes of Paris Saint-Germain, Arsenal and Manchester United.

United and Arsenal have had a difficult last few season and their sights are set on returning to their former glory, in PSG’s case – the Parisians are still finding success in Europe impossible since new owners injected a huge amount of money into the club.

Barcelona could overhaul their defence next season as two free agent stars linked to the Nou Camp Apr 9 2021, 21:07
Manchester City

Chelsea could rival Arsenal for Bayern star who’s been told he can leave for free Apr 8 2021, 9:08
Chelsea FC