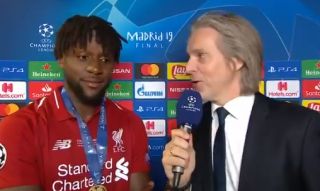 Liverpool striker Divock Origi has emerged as a surprise hero for the club this season with some big performances in the latter stages of this Champions League campaign.

The Belgium international has rarely been a starter for the Reds, but scored twice in that thrilling semi-final comeback over Barcelona before also putting last night’s final against Tottenham to bed with a late second to help deliver the trophy.

Watch the interview above as Origi explains how he’s had to adjust his expectations a little after not being a regular at Anfield, but says he just focused on always trying to do something positive when he got on the pitch.

It certainly sounds like the 24-year-old has a great mentality, and he’s done superbly to score some of the team’s most important goals this season as a result.