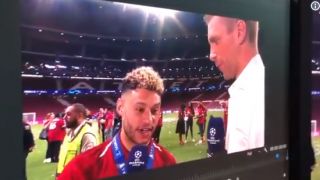 Liverpool midfielder Alex Oxlade-Chamberlain gave a special shout out to his old club Arsenal after beating Tottenham in the Champions League final.

The England international has been a quality signing for the Reds, though injury meant he missed much of this campaign and he was only an unused substitute for the game against Spurs.

Still, the Ox spoke with old team-mate Per Mertesacker after the game and admitted he had a special motivation for the win in Madrid due to his Arsenal connections.

The 25-year-old spent six years at the Emirates Stadium so knows how much Arsenal fans would have hated to see north London rivals Tottenham win the Champions League before them.

He s less a fucker than Giroud. Thanks @Alex_OxChambo and congrats !