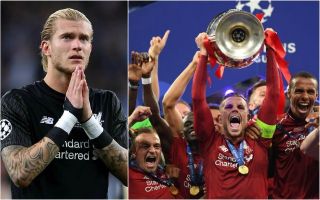 Just over a year after Liverpool lost the Champions League final to Real Madrid in Kiev, they are now European champions once again after their victory over Tottenham.

The Reds beat their Premier League rivals 2-0 in Madrid with a solid, if unconvincing performance to make up for last year’s heartache.

You may remember that in that 3-1 defeat to Real, goalkeeper Loris Karius dropped two absolute clangers, making errors for the opening goal by Karim Benzema and for the third goal by Gareth Bale.

The German shot-stopper has since been sent out on loan and replaced by Alisson in goal for Jurgen Klopp’s side – probably the right move.

Still, Karius showed his class yesterday evening with a tweet of congratulations to LFC on what must have been a difficult night for him personally.

Here’s what he had to say, and unsurprisingly it’s gone down well with over 20,000 retweets at the time of writing.

Congrats, @LFC. Really happy for everyone at the club and fans. You deserved this.