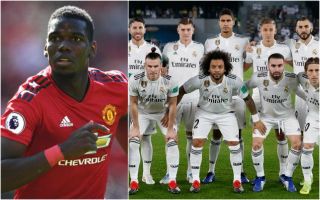 Manchester United midfielder Paul Pogba remains a transfer target for Real Madrid, but they’d prepare not to pay a big fee for the Frenchman.

In fairness, while Pogba remains a big name in world football, his inconsistent performances in his time with Man Utd suggest he might not be the best player to splash out too much cash on.

In what sounds like a sensible policy, Real Madrid would rather offload players in a big to get Pogba’s fee down, with a number of possible names on offer, according to the Times.

The report lists Gareth Bale as a high earner that Los Blancos would love to have off their books, but other players on offer to the Red Devils could also be James Rodriguez, Theo Hernandez, Keylor Navas and Isco, even if the latter is still rated by Zinedine Zidane as a potentially useful squad member he’d like to have around.

From United’s point of view, Bale seems a risky choice but might also be an option worth exploring if they don’t have to pay big for him, with his recent form and fitness a bit of a worry.

Paul Pogba is a transfer target for Real Madrid

Still, the Wales international would surely still be an upgrade on Alexis Sanchez in attack, while Isco and James Rodriguez might also be useful additions in that department.

Navas in goal may well be an upgrade on David de Gea on current form, while Theo Hernandez is a promising youngster who could be a smart long-term signing even if he wouldn’t necessarily improve Ole Gunnar Solskjaer’s squad straight away.