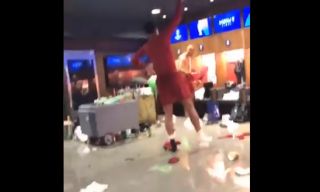 Liverpool stars all sang in praise of their star defender Virgil van Dijk after last night’s 2-0 win over Tottenham in the Champions League final.

The Reds lifted their sixth European Cup in Madrid with a solid display against their Premier League rivals, with an early goal from Mohamed Salah and a late one from Divock Origi enough for them on the night.

The @VirgilvDijk song from inside the dressing room. ?

Unlike last season, Liverpool’s solid defensive foundations helped them to a result even though they weren’t at 100 per cent, so it’s unsurprising to see Van Dijk attract so much attention.

See the clip above as the Dutchman does a little dance while his team-mates sing and chant about him in the changing room after the game.