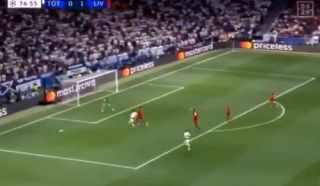 Liverpool defender Virgil van Dijk must be a serious contender for the Ballon d’Or after playing a starring role in this superb season at Anfield.

The Netherlands international produced another superb defensive display for the Reds last night as they beat Tottenham 2-0 in the Champions League final in Madrid.

What a huge moment this was last night in the 75th minute. Matip absolutely gassed but Van Dijk just does not get dribbled past. pic.twitter.com/IbdyaBl2ai

The moment in the video above may have been a particular highlight, with Van Dijk showing great composure to stick with Son Heung-min as he bore down on the LFC goal.

Watch as Van Dijk, cool as you like, times his challenge to perfection to help Liverpool preserve what was at that point only a 1-0 lead.

It’s little moments like this that make him the best centre-back on the planet, and undoubtedly one of the best players in the world.

That Van Dijk tackle on Son yesterday was a defending masterclass ?

I don't if you guys saw how Van Dijk defended Son. I get goosebumps thinking about it ??

Nobody, and I mean absolutely nobody, has successfully dribbled past Virgil van Dijk this season.

What a tackle this was. #LFC pic.twitter.com/UV5dG3TojU