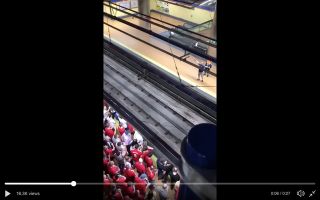 The Tottenham fan was on the opposite platform to the Liverpool fans at one of Madrid’s metro stations.

Check out the brilliant moment that was captured by Guardian Sport writer Sachin Nakrani:

Tottenham were very good tonight and their fans were sound out here in Madrid, as this fella at the metro stop by the ground proves: pic.twitter.com/hfPmQj0VgH

Football really is the most beautiful game in the world, look how many people it has brought together.