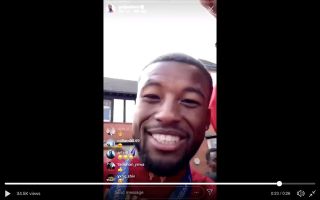 Liverpool star Gini Wijnaldum is certainly celebrating his side’s Champions League triumph to the max, the star dropped his phone during the Reds’ trophy parade.

During Liverpool’s open-top bus parade to celebrate last night’s Champions League victory, midfielder Gini Wijnaldum took his efforts to belt out the fabled ‘Allez, Allez, Allez’ one step too far and the ace nearly ended up with a broken phone.

Wijnaldum looked as happy as someone who’d just won the Champions League when he realised his phone was still working.

Check out Wijnaldum’s lucky escape with his phone below:

Wijnaldum was pivotal to Liverpool’s triumph, without the former Newcastle star’s brace against Barcelona – the Reds wouldn’t have made it to the final and had the chance to win their first trophy in seven years.