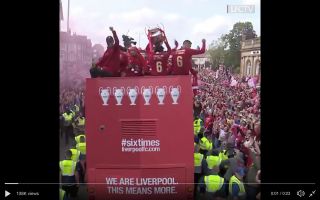 There are some amazing scenes in Liverpool right now as the Reds return home to their city with their sixth Champions League trophy that was won last night.

The Reds only returned home from Madrid this afternoon and the players and staff headed straight out onto the streets of Liverpool to parade their Champions League trophy in style.

Check out the unbelievable scenes at the parade below:

Plenty of Reds are already out across the city to see the Champions of Europe. ?? #SixTimes pic.twitter.com/Ww9n7KikFH

Take a look at Liverpool’s players singing the ‘Allez, Allez, Allez’ chant which has become synonymous with the Reds recently:

Liverpool’s Mayor also revealed that a whopping 250,000 people are in attendance at the parade:

Truly amazing as over 250,000 people on the streets of City celebrating and paying tribute to .@LFC over 250 of the worlds media live filming and showcasing those images of a truly global world class City. Couldn’t pay for coverage.

Remember to get a shot of Liver Birds later

After facing some struggles in the last decade, the Reds are well and truly back at the top of their game, fans will be hoping that the trophies start flowing for Klopp’s side now – with this team anything is possible.