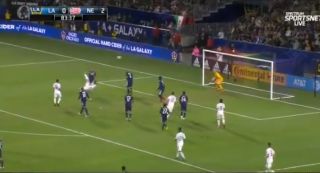 Zlatan Ibrahimovic is still going strong at the age of 37 – and still looks too good for the MLS based on this evidence.

Watch the video below as the veteran Swedish forward scores a sublime overhead kick for his side in that typical style that’s almost become a trademark of his.

ZLATAN IBRAHIMOVIC JUST SCORED THIS GOAL. This man is 37 years old and he’s still doing a madness. This is absolutely filthy. ? pic.twitter.com/GG4hb0uXIo

Ibrahimovic has always had something of a knack for acrobatic efforts and other inventive goals, and it’s great to see him still working his magic even in his late 30s.

That makes it 11 goals and three assists in 12 MLS games for Zlatan this season – a remarkable return that suggests he could perhaps still do a job at a European club.