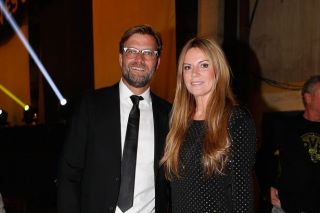 Liverpool manager Jurgen Klopp is a lucky man indeed, with his wife Ulla Sandrock clearly one of his biggest fans.

Look at the photo below that’s doing the rounds, with the Reds boss’ missus standing on a bin to get a good view of her man and his team as they paraded the Champions League trophy around Liverpool.

Mrs. Klopp cheering for her husband while standing on a bin during Liverpool's Champions League trophy parade.

The Merseyside giants won their sixth European Cup with a 2-0 win over Tottenham on Saturday, and Klopp spoke afterwards about what a relief it is for his family to finally bring home a piece of silverware.

“I’m so happy for my family,” he said after the game in Madrid.

“They suffer every year when we get to a final and lose so they deserve it more than anybody because they are so supportive.”

Jurgen klopp s wife celebrating and klopp celebrating back to her
I like it ?#lfc pic.twitter.com/NsujINJdqJ

I love that Klopp's wife was just in town for the victory parade going mad on her own on top of a bin to get a good view ??? woman after my own heart!

Love that Mrs Klopp was standing on a bin to see the victory parade go by yesterday. The Klopps are amazing people! ???? #YNWA #LFC

Love this of Mrs Klopp, standing on a bin cheering the boys on?? pic.twitter.com/pPCL3FEXPh