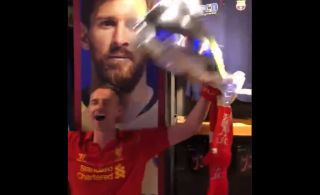 Some Liverpool fans had a little song and dance in an FC Barcelona club shop after their Champions League final win over Tottenham.

Watch this hilarious video below as a group of Reds enter the Barca store chanting and trolling the club they knocked out of the semi-finals of this season’s competition.

There was special mention as well for Philippe Coutinho at the end, with the Brazil international notably leaving Anfield for the Nou Camp midway through last season.

Since then, Liverpool have made two Champions League finals without him, losing to Real Madrid last season before finally getting their hands on the trophy this year with a 2-0 win over Spurs.