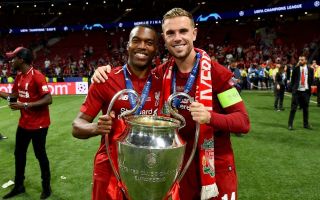 Liverpool striker Daniel Sturridge has revealed that the Reds squad had an important long talk before the Champions League final victory over Tottenham on Saturday night.

Goals from Mohamed Salah and Divock Origi gave the Merseyside giants the 2-0 win and their sixth European Cup – the first trophy the club have won under manager Jurgen Klopp after a number of near-misses.

The German tactician had lost his last six finals before the win over Tottenham, with Liverpool also finishing a very close second in the Premier League table this season.

Still, Sturridge felt something had changed before this year’s final in Madrid, saying the players had a good talk beforehand to prepare in a way that they hadn’t in their previous final losses.

“All the things when you lost, you take them into a game because you’ve learnt from them: all the pain, all the heartache you had prior to that,” Sturridge is quoted in the Guardian.

“And when you come into a game like this final, you go: ‘OK, cool.’ You come in at half-time and you talk different. You’re like: ‘OK, remember what happened last time guys. Let’s do this.’ When we got in at half-time everyone started speaking about how they felt we needed to improve for the second half. In the Europa League we were 1-0 up and we lost 3-1.

“That was important, just the players hashing it out. We haven’t had those conversations before. I feel like maybe before the Europa League final we didn’t prepare as well. We’d had two [European finals] before this year so we have learned much more.

“When you lose you think about anything and everything you could have done right and what you did wrong. You learn from that and that’s what we did on Saturday.”

The England international was also a Champions League winner during his Chelsea days, and says he doesn’t feel particularly bothered about not having played a big role in either triumph.

“I contributed and even the players who haven’t played a minute [have contributed too],” he said.

“There are guys who have been on the bench and haven’t played a single minute but have been a part of it: from training, to acting like the opposition that we have been playing against, to doing a job, to sacrificing themselves and the way they play just to do a job on the training field to help them prepare themselves the best way that they can. It’s amazing.”