Liverpool have recently been linked with Lyon winger and former Manchester United man Memphis Depay – and he’s just got a few of their fans rather excited.

See below as the Netherlands international congratulates his Dutch team-mates Virgil van Dijk and Georginio Wijnaldum on their Champions League final win this weekend.

Unsurprisingly, following recent links with Depay and the Reds via the Manchester Evening News, this has led to a number of comments urging the player to make the move to Anfield.

We’re not sure how likely this is or how much Liverpool even need the 25-year-old, who would be a slightly controversial signing due to his Man Utd connections.

It’s also worth noting Depay did not exactly shine in his first spell in the Premier League, even if he has improved since moving to Lyon.

‘Come join them at Liverpool m8’ said one fan.

‘Now you coming to join them,’ commented another.

And here are a few more of that ilk… 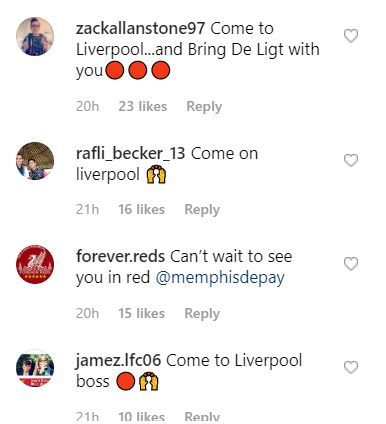