Barcelona are being linked again with a surprise move to re-sign Neymar from Paris Saint-Germain this summer in a potential swap transfer.

The Brazil international left Barca for PSG in 2017 and was recently linked with a move back to the Nou Camp in an exchange involving Ousmane Dembele in the tweet below by Gerard Romero:

MORE: Manchester United in talks with star who angered Barcelona so much they pulled out of transfer

Now similar rumours are surfacing again, with the print edition of Mundo Deportivo reporting on their front page that Dembele is one of just three players who could be on offer to the French giants.

They also suggest Ivan Rakitic and Philippe Coutinho could be options to move to PSG, which could be bad news for suitors in the Premier League. 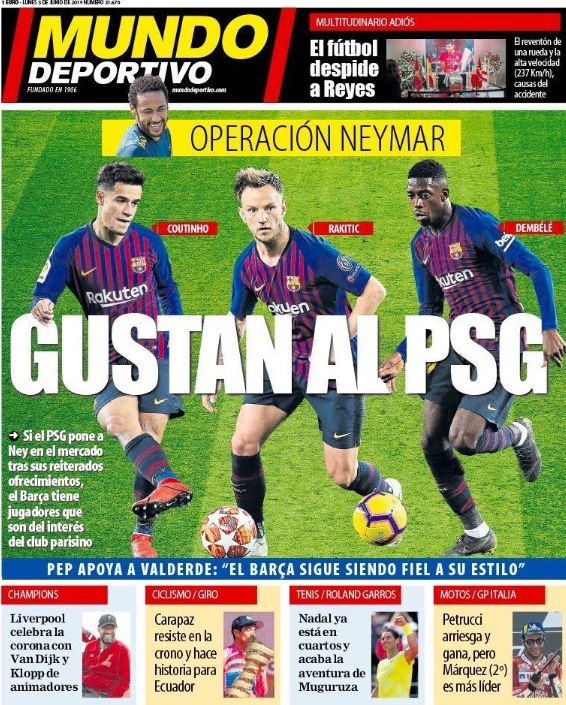 The Daily Mirror have been among the sources to recently claim Chelsea want Coutinho as a replacement if Eden Hazard leaves for Real Madrid, as is expected after a report from the Telegraph.

Rakitic, meanwhile, has also been linked with a move to England as the Daily Record claim Manchester United are interested in bringing in the Croatia international to strengthen their midfield.

Coutinho could be ideal to replace Hazard at Chelsea even if he hasn’t been at his best of late, while Man Utd could certainly benefit from Rakitic as an upgrade on players like Nemanja Matic and Fred.