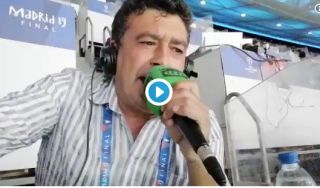 This Spanish commentator filmed himself commentating on Divock Origi’s goal for Liverpool against Tottenham in the Champions League final.

And we’re glad he did because, truly, this is a work of art as he goes absolutely wild for the Belgian’s strike.

We’re not exactly sure about everything he’s saying in the video clip above, but that’s hardly the point as he speaks with passion and excitement that British commentators could do well to use in their coverage a bit more!