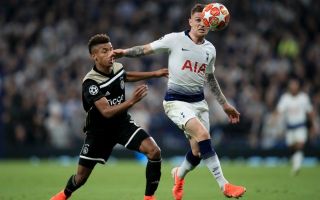 Manchester United are reportedly still interested in the transfer of Tottenham right-back Kieran Trippier despite their rivals proving tough negotiators.

The England international hasn’t been at his very best for Spurs this season, though he surely remains one of the better full-backs in the Premier League after helping his club reach the Champions League final.

Trippier would also be a decent short-term option at Old Trafford, with Antonio Valencia leaving this summer and youngster Diogo Dalot perhaps still not ready to be first choice.

According to the Daily Mail, however, Man Utd fear being priced out of a move for Trippier and are considering other options as well.

That said, the report states someone like Crystal Palace starlet Aaron Wan-Bissaka would also be expensive at around £45m.

Belgian wing back Thomas Meunier is a wanted man. Unai Emery is pushing to get him to Arsenal. Man United have him on their list too. PSG are keen on selling him for the right fee – +/- €25m. Meunier is a childhood United fan and even attended some games this season. #afc #mufc pic.twitter.com/ifc8xL0b15

He and Trippier would cost a similar amount, so it just remains to be seen now which player the club will feel represents the best value for money.

MUFC surely need to act quick, though, as they cannot go into next season without improving on a defence that conceded 54 goals in 38 league matches – their worst goals-against tally in the Premier League era.