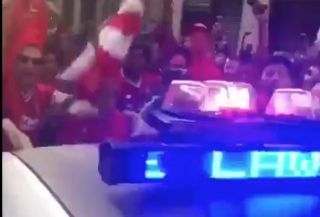 Liverpool fans were busy celebrating across the world on Saturday after their secured their sixth European Trophy by defeating Tottenham in the Champions League final.

Goals from Mohamed Salah and Divock Origi sealed a 2-0 win in Madrid, and unsurprisingly given the size and history of the club, fans all over the globe were enjoying the success.

As seen in the video below, it even stretched over to New York City, as jubilant Liverpool fans were filmed stopping a police car after the game as they celebrated the victory.

Having come so close to the Premier League title this past season, they will have been delighted to land a major trophy to end the campaign on a high, and it certainly sets them up nicely to now go on and add to their collection in the coming years with Jurgen Klopp ending a painful wait for silverware too.

The police officer in the video below probably didn’t quite appreciate getting blocked in, but at least it was all in good spirits amid a buoyant atmosphere.

How big is LFC ? This is New York .. pic.twitter.com/xCCznoNo5k