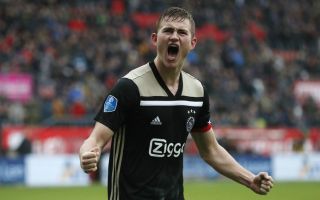 The reps of Ajax defender Matthijs de Ligt have reportedly told two clubs the same thing during transfer rumours linking him with a host of Europe’s biggest names such as Manchester United, Liverpool and Barcelona.

The 19-year-old is one of the most sought-after young talents on the planet right now after a hugely impressive season for Ajax, whom he captained to Eredivisie glory and on a surprise run to the Champions League semi-finals.

It’s not clear where De Ligt will end up next, however, with ESPN recently linking him with Manchester United and Barcelona, while the tweet below shows today’s print edition of Bild is also claiming he’s a target for Liverpool.

Bild reporting that «de Ligt could be Klopp’s next triumph”

Will Man UTD lose the player to Liverpool? pic.twitter.com/URt3Y8zaZ1

And now the latest from journalist Raphael Honigstein is that De Ligt’s people have made the same promise to two separate clubs – that he only wants to join them.

However, as you can see from the tweet below, we’re not entirely sure which clubs he’s made this vow to.

De Ligt: have now heard from two top European clubs who were told by his people that he "only" wants to go to them.

Either way, it perhaps shouldn’t come as a big surprise that a player being represented by Mino Raiola looks to be leading us along what looks like being a lengthy transfer saga with plenty of potential for drama.

Man Utd probably need De Ligt most, but the Netherlands international would also make a great fit alongside Virgil van Dijk at Liverpool – an ambitious club on the up that could give him a great platform to improve in years to come.

Then Barcelona obviously have that Ajax connection that could mean he settles in more easily with the style of play at the Nou Camp.

Speaking last week in the video below, De Ligt indicated he was in no particular hurry to come to a decision on his future.

Matthijs de Ligt claims he has not made a decision. pic.twitter.com/i8Oa6M0deB