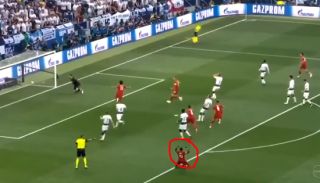 This Liverpool fan has spotted the epic reaction of Sadio Mane to Mohamed Salah’s goal for Liverpool against Tottenham in the Champions League final.

The Senegal international helped win the penalty as his cross was handled by Moussa Sissoko, and it clearly meant a lot to him to see the ball hit the back of the net.

Sadio Mané was all of us in this momentpic.twitter.com/gkKFdk3duX

Mane was on the score sheet in the 3-1 final defeat to Real Madrid a year ago, but it’s clear he’ll take not managing a goal himself if the team wins.

Divock Origi later added the crucial second to help LFC lift the European Cup for the sixth time in their history.