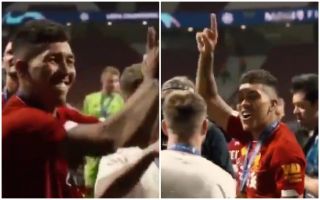 Liverpool fans certainly enjoyed themselves at the weekend and Roberto Firmino joined them for a sing-a-long in Madrid after the Champions League final.

The Merseyside giants secured a 2-0 win over Tottenham in the Spanish capital to secure their sixth European trophy, sparking wild scenes of celebrations for the travelling supporters.

As seen in the video below, there was a brilliant moment involving Firmino, as he lapped the atmosphere up and even joined in with the fans in singing their song for him.

There is undoubtedly a solid bond between the players, Jurgen Klopp and the Liverpool supporters, and having tasted success to end the season, they will undoubtedly come back hungry for more next year as they will also hope to bounce back from their Premier League title disappointment.

For now though, they will continue to enjoy this achievement, with Firmino as important as any other player in the squad in their success.

Firmino singing his song with the fans?? pic.twitter.com/Sfr3d0qvt5