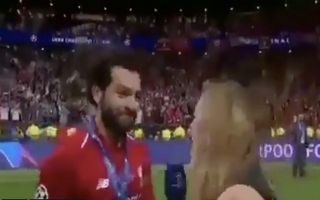 The Egyptian scored the opening goal in the European Cup final at Wanda Metropolitano in Madrid over the weekend, netting from the penalty spot with just two minutes on the clock.

Divock Origi came off the bench to seal a 2-0 victory for the Reds late on, sparking wild scenes of celebration in the stands and on the pitch after the final whistle.

When being interviewed by a female reporter post-match, Salah hilariously rejected her when he thought she was trying to go in for a kiss, raising his hand politely as she leaned in closer so that he could hear her questions.

Check out a short clip of the hysterical encounter after Liverpool’s Champions League triumph below, via Twitter.

Mo Salah thought the reporter was going in for a kiss so decided to go for the hand raise! ? #LFC pic.twitter.com/DhA8EAPDlv

Just look at Salah reaction, he thought the reporter would kiss him. ?

This man is so pure ? pic.twitter.com/Mz8BjtmMXt

Salah actually thought the reporter was about to kiss him ?? pic.twitter.com/hYtcBRwtIk