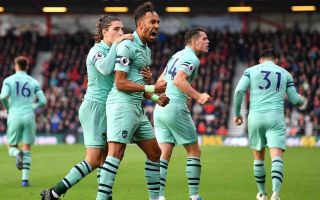 Arsenal striker Pierre-Emerick Aubameyang has been spotted removing any trace of the club from his Instagram bio following transfer rumours linking him with a possible departure from the Emirates Stadium to the Chinese Super League.

The Gabon international has only been with the Gunners for a year and a half after a January move from Borussia Dortmund in 2017/18, but it may be that he won’t be sticking around for much longer.

Image: Pierre-Emerick Aubameyang has remove Arsenal from his bio on Instagram, as well as his profile picture. [IG: aubameyang97] #afc pic.twitter.com/sPZrMS3wKs

Despite Aubameyang’s fine form in the Premier League, it’s certainly not been the smoothest period at Arsenal, with Arsene Wenger surprisingly stepping down just a few months after the 29-year-old joined, and with his replacement Unai Emery not enjoying a particularly convincing first season in charge.

According to the Times, AFC now face a bit of a worry over Aubameyang as he has a tempting big-money offer to move to China.

Given the player’s lethal form in front of goal is one of this team’s only real strong points, fans will be very worried to see him fuel these rumours with his social media antics, which can often be a decent indicator of what a player is going through in the modern game.