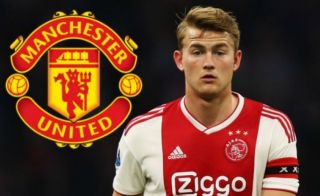 According to the Independent, an unnamed Barca official reacted with bemusement at the prospect of the Red Devils landing De Ligt this summer, comparing a move to Old Trafford with the club in its current state to making a move to the Chinese Super League.

This is a damning indication of where Man Utd are at the moment after another difficult season that saw them finish trophyless and outside of the Champions League qualification places.

It’s certainly hard to understand why a top young player like De Ligt would rush to join United at the moment if he is serious about winning major honours and developing his game.

As the anonymous Barcelona chief says, as quoted by the Independent, it’s hard to see any other reason to join MUFC right now other than to make a lot of money.

Matthijs de Ligt has been linked with Manchester United and Barcelona

“With the state they’re in, it’s not far off picking the Chinese league, career-wise. It’d be sacrificing development and ambition for money in the same way,” the source said.

United urgently need to sort themselves out and take a leaf out of Liverpool’s book in terms of organisation and structure, with the Reds managing to spend less money on players in recent years but become genuine Premier League title contenders and Champions League finalists two years in a row, with a win over Tottenham this year.